I am so sick of little kids staring into their little hand-held screens, I could punch Steve Jobs in the face.

Okay, I know he’s dead. And he wears glasses. Both of which are no-no’s for punching. Also, I have never punched anything or anyone in my life.

But I’m telling you right now, I am growing seriously WEARY of the iWorld — and my kids don’t even officially live there yet.

Everyone my kids know — literally all 9-12 year olds in their circle of life — have phones or iTouches or Kindle Fires or tablets or all of the above. And every day I get an earful about it.

This is my crap phone. It’s like something out of a time capsule.

Mostly I hear about how my kids feel left out — because all anyone does anymore on the bus (instead of chit-chatting or mooning passers-by) is play video games or text friends other than the one they’re sitting beside. I hear about how much they need these gadgets to fit in, to do anything imaginable that’s cool, to basically breathe 21st century oxygen in and out.

Which I won’t do. I couldn’t make it a day. But still, sometimes I feel like I’m straddling the split-rail fence of time.

And I’m getting splinters.

Last weekend we went with friends to Sturbridge Village in Massachusetts, one of those Colonial re-enactment places where you walk the dusty village streets and watch an old guy in a funny hat make his own nails and some ladies in dingy full-length dresses and black orthopedic sneakers make candles out of lard. It was a salve to my tech-weary spirit. 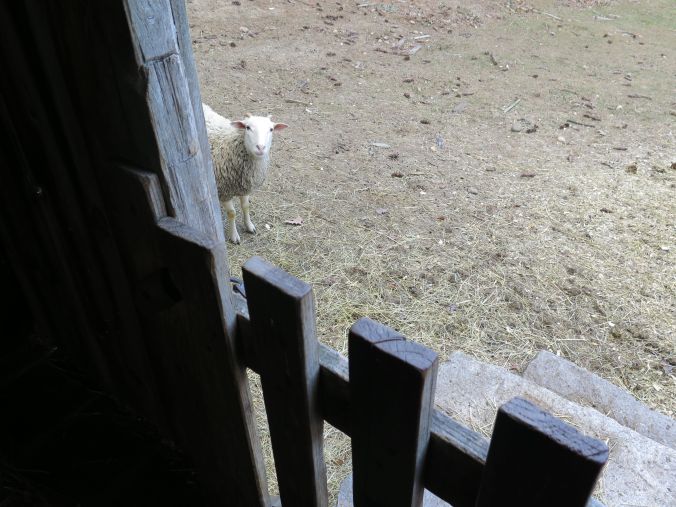 Greetings from the future, little sheep.

It’s true that I have zero interest in butter-churning. (I happen to love butter that comes in wrapped sticks, four to a box.) I wouldn’t be overly jazzed about living in a house just one degree warmer than a New England winter. And I am not a fan of straw beds teeming with lice.

But something in me craves what that place in time represents — simplicity, innocence, diligent work for daily bread, family, faith. No entitlement. No screens. No Kardashians.

I have no idea what this is, but it’s surely something smart and crafty and super-useful. There’s not an app for that.

Something in me hungers to GO BACK. To make it all stop spinning so fast. To live a life that feels simpler and safer (despite big bummers like cholera and scarlet fever). To raise children in a world that doesn’t show them everything too soon and make them grow up before they’re ready.

Would you just look at this picture?

My friend bought BONNETS for her daughter and mine in the general store. And without the first thought of Instagram or a trace of self-consciousness, those 5th-grade girls ran through the village in them. They scooted down hiking trails in them. They were Half-Pint and Mary incarnate.

For one day, those girls took a break from growing up. It was so precious I could have cried.

As much as I long to linger in this land of bonnets and butter-churning, I know that going back isn’t an option.

But I have to believe that how we move forward is.

How many steps forward we allow as parents, how many doors we crack open and when, where we let it lead our kids and how quickly…we still have a say.

When and if I choose to let the horse out of the techno-barn, I can’t let that animal run wild for the hills. I have to be smart about it and watch where it goes and give it reasonable limits — without throwing up my hands or covering my eyes with my calico apron.

With every fiber of my old-fashioned being, I wish we didn’t have to worry about all this cyber-crap. But it’s not going away. Hopefully, neither am I.

2 thoughts on “Stop the iWorld…I Want to Get Off”